Some cookies used are essential to providing a service, while others help us improve your experience and provide us with insights into how the site is being used.

Necessary cookies enable core functionality such as security, network management, and accessibility. You may disable these by changing your browser settings, but this may affect how the website functions.

We'd like to allow Social Media cookies to provide a richer experience. These cookies will allow us the ability to list Fife Council tweets and Facebook posts, Google maps, audio clips & Videos on some of our pages. Our videos use Youtube's privacy-enhanced mode.

What do we mean by Neurodevelopment?

Neurodevelopment refers to the way the brain builds and organises itself, and how it works in everyday life. Our brains start to form just a few weeks after conception, and continue to develop all the way through childhood, through our teenage years, and doesn’t finish until we’re into early adulthood. While we have a rough blueprint of how our brains develop, each person’s brain will develop slightly differently. Our brain is a big part of what makes us unique and gives each of us different strengths.

Neurodiversity - The way our brains develop follows a predictable pattern, but because brains are so complex, the exact way and time they develop can vary from person to person. The term ‘neurodiversity’ describes this wide variation in brain development and processes, and therefore in individuals’ experiences and behaviours.

Neurodivergent - Sometimes these variations in the way brains develop are substantial enough to give rise to more noticeable differences, which can lead to diagnostic labels such as autism and ADHD. ‘Neurodivergent’ is a term used to describe someone whose brain, thought processes and/or cognitive abilities differs from those who are neurotypical. Neurodivergence is natural and neurodiversity should be welcomed and appreciated as part of human difference.

Neurotypical – A term used to describe an individual whose brain generally functions and processes information in the way society expects.

What are Neurodevelopmental Disorders?

Sometimes children developing differently may need a bit of extra support from the people around them, or some changes to their environment to help them to achieve their potential. Simple adaptations can make things easier. For some people, however, they may continue to need a lot of support, even with adaptations.

A diagnosis of a ‘neurodevelopmental disorder’ happens when someone experiences significant difficulties in their day-to-day life, due to their neurodivergence.

Neurodevelopmental diagnoses most commonly include: 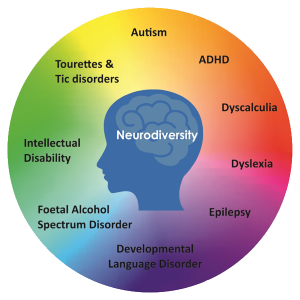 Image from Autismtoolbox.co.uk, which shows the range of neurodevelopmental 'disorders'

Many neurodevelopmental difficulties overlap and interact. These conditions are often identified and diagnosed during childhood or adolescence. Symptoms and behaviours often change as a child grows older, with some difficulties being more long-standing. For some children and young people, some areas may become more noticeable and have an increasing impact on their daily lives as they get older.

Was this page helpful?